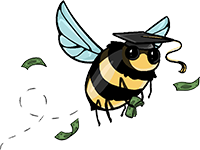 tl;dr - I'm starting a union for loans, and the more people that sign up, the better.

When I applied to law school, I was incredibly frustrated by how hard it was to acquire the knowledge needed to succeed during the application process. It didn't seem fair that some people had seemingly exclusive access to support systems and info that helped them excel.

LSData was created as a response to that -- to share knowledge and make it just a little bit easier for applicants to make informed choices. My next project, BundleBee, has the same goal.

Imagine walking up to a lender alone and asking for a lower rate on your loans. Sounds scary. And Ms. Lender will probably have all sorts of excuses for you. Now imagine walking up to a lender with 500 other law school students and making the same demand together. Ms. Lender is much more likely to take your demands seriously; collectively you've become too important to ignore.

This is the concept underlying BundleBee. We bring students together to form a Hive that is too important to ignore. We'll represent the Hive in negotiations and get the best deal possible for the Hive -- better than what anyone can get alone.